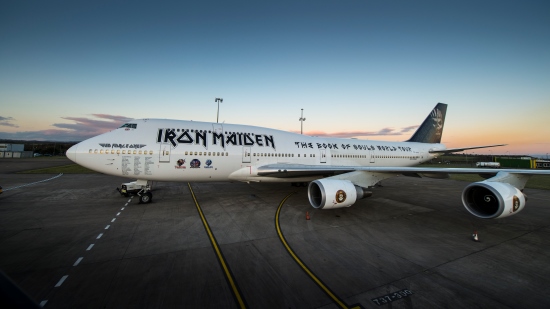 Fast-living and rebel-cool – heavy metal rock band, Iron Maiden, used a Boeing 747 dubbed Ed Force One to take their iconic sound to people around the world with the Book of Souls World Tour 2016. We take a look backstage at what happens when one badass band teams up with the world’s most iconic jet plane.

Backstage on Ed Force One

Fast-living and rebel-cool – heavy metal rock band, Iron Maiden, used a Boeing 747 dubbed Ed Force One to take their iconic sound to people around the world with the Book of Souls World Tour 2016. We take a look backstage at what happens when one badass band teams up with the world’s most iconic jet plane.

In the beginning: Ed Force One

We’ve said goodbye to Ed Force One, the flying behemoth that became the iconic Iron Maiden tour plane – recognized on runways around the world, drawing airport staff and crowds wherever it went. Here’s a look backstage on Ed Force One, the biggest and most exciting project we’ve ever had the privilege of working on.

It all started with a phone call from Air Atlanta, an Icelandic airline that had been approached by Iron Maiden to arrange the Boeing 747 tour plane that became known internationally as Ed Force One (the name was chosen by fans as part of a website competition). Air Atlanta felt that Air Charter Service (ACS) had the resources and expertise to undertake this immensely complicated and packed schedule.

When this latest incarnation of Ed Force One first touched down in Cardiff sporting a special livery of ‘Eddie’ – Iron Maiden’s iconic mascot – snarling from the tail of this heavy metal beast of the skies, we knew we were in for the ride of our lives.

The massive four-engine Boeing 747 airplane – twice the size and over three times the weight of the Boeing 757 used on previous tours – is able to carry 10,000 kilograms of equipment, and has an excellent track record for safety and comfort. Iron Maiden lead singer Bruce Dickinson, said of the private jet:

"It's such a beautiful airplane. This machine allows us to do a European itinerary on an intercontinental basis. It's our time machine – our magic carpet."

With 50 shows, 22 tons of cargo and 400 suppliers and handlers, it was a beast of a job, and one where we enjoyed (almost) every moment.

Inside Ed Force One

Taking off on the first leg of the Book of Souls World Tour, we had at least two members of Air Charter Service (ACS) staff on board for every flight. The heralds of Ed Force One managed to keep 10 steps ahead of a punishing tour itinerary every step of the way. This meant dealing with flight permissions, landing and take-off slots, fuelling, catering, baggage handling, VIP services, and the endless rounds of minutiae that go into transporting the Iron Maiden 747 around the world.

The project was immense, not only involving those in the sky but also at least 15 members of ACS head office staff, as well as personnel from all the offices visited on the tour route. Each member of staff was crucial to ensure that tour transportation went without a hitch. For The Trooper on board from ACS, no challenge was too big, too small, or too extraordinary, whether decanting liquids and unpacking sandwiches, or getting Iron Maiden musicians and entourage through security. And then there was the expected – like smoothing over the logistics of gaining access to the aircraft after landing to collect wayward football kits, or arranging an air-to-air photoshoot. Nothing could make ACS staff Run to the Hills.

Another extraordinary turn of events was when the controls of Ed Force One were taken over and the Boeing 747-400 was flown by Iron Maiden lead singer, Bruce Dickinson. Turns out, Dickinson is a man of many talents – he had in the past been a commercial airline pilot for Astraeus. He’d also played a role in the award-winning documentary, Iron Maiden: Flight 666. Dickinson was Ed Force One’s main pilot for the duration of the Book of Souls World Tour.

Clearly, Dickinson knew his planes and it explained the love affair the band has had over the years with private jets and the freedom of flight. Back in 2008, the group first commissioned an Astraeus Airlines Boeing 757 for their Somewhere Back in Time World Tour. The plane was converted so it could carry the band and their crew and stage equipment, allowing the group to perform in countries which would have otherwise been unreachable logistically.

There were a few challenges along the way of course, with extra security at select airports, VIP transfers and secret routes into and out of airports that had to be expertly arranged. But all the challenges and hard work were more than made up for with water cannon salutes, fire trucks blaring Iron Maiden songs, and fans crowded around perimeter fences.

The biggest challenge had to do with the enormous amount of interest the aircraft generated. Everyone from the crew of Air Force One in Chicago to the crew aboard Antonov An-225 Mriya (the largest aircraft in the world) wanted a tour of the Iron Maiden private plane. In fact, Bruce Dickinson – as both Iron Maiden lead singer and pilot of Ed Force One – took the 747 to Boeing Headquarters at Paine Field to help them celebrate their 100th anniversary and personally take a lucky few for an onboard tour. In Munich, Germany, Chancellor Angela Merkel couldn’t resist instructing that her (much smaller) jet was parked next to the Ed Force One beast, and the Iron Maiden tour plane had a similar effect on President Hollande of France.

Ed Force One rallies after a bump in the road

It wasn’t all smooth sailing for Ed Force One. In Santiago di Chile, the plane had been closed up and everyone had settled into their hotels for the night, when airport workers began to move the aircraft. An incident involving a loose steering pin and an airport tug resulted in damage to two engines and the undercarriage of the plane, as well as injury to two airport personnel.

Suddenly Ed Force One was grounded, but, as is the way, the show found a way to go on. Within hours – after collaboration with other suppliers including Iron Maiden’s management, Air Atlanta, and Rock-It Cargo – alternative charters and a few scheduled seats were sourced for Iron Maiden’s ‘Killer Krew’ and the band managed to get to their next show in Argentina.

Over 20 tons of stage equipment and production were trucked over a difficult pass through the Andes Mountains to the border into Cordoba. Alternative transport had to be rapidly arranged for both the Argentine and Brazilian shows.

Back with Ed Force One, two massive new engines, engineers, parts, cowlings and tools were flown in from Europe. Within 10 days and after a magnificent job by said engineers, the beast of Ed Force One was once again ready to command the skies.

Musicians and their private jets

Iron Maiden are part of a legacy of celebrities who have owned or chartered private jets to get them to adoring fans around the world in the most efficient – and coolest – way on earth.

Recognize any of these names?

Having covered six continents, 21 countries and flying almost 100,000 kilometres, the Ed Force One has bowed out, but its legacy will live on; through the collective memories of those on board, those crowding the fences, those million or so fans at the 50 shows and everyone who had the pleasure of following its progress around the world.

We are ACS, and this was a journey that whizzed by at the Speed of Light, into The Great Unknown, with some of the greatest rockers this world has ever seen. At times it felt like a fine line between Death Or Glory, but it was a journey we’ll never forget.

Thank you, Iron Maiden, for letting us be a part of the Book of Souls World Tour 2016.

Since the highly successful Book of Souls World Tour in 2016, the band has reached new heights. They are considered one of the most successful heavy metal bands in history, with over 100 million copies of their albums sold worldwide.

In 2017, Bruce Dickinson released his memoir, What Does This Button Do?, most of which he wrote by hand. A number of subjects that Dickinson had kept private up to publication of the book were dealt with in its pages. That same year, the band released a mobile game, Legacy of the Beast. Users can play band mascot, Eddie, battling monsters and watching as their character evolves to the soundtrack of the band's greatest hits. The game’s release was followed by the Legacy of the Beast World Tour in 2018 when fans were treated to a spectacular production that included a replica Spitfire fighter plane from World War II.

Plans for 2019 include a return to North America with their 33-city Legacy of the Beast World Tour which is set to be the band’s biggest production ever. We wish Iron Maiden all the best for their tour launch on July 18. The odyssey continues.