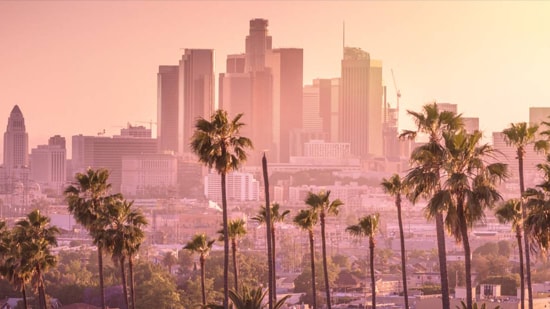 We’ve assembled a list of the airports within Los Angeles that go above and beyond, offering exceptional facilities for private jet travelers. With first class amenities and stylish FBOs – “fixed-base operators,” or mini private jet terminals – there’s no need to dread waiting at the airport. You may even decide to arrive a little early.

Located to the west of Los Angeles, Van Nuys Airport is the city’s most popular airport for private charter flights. In fact, it’s one of the busiest noncommercial airports in the world, with over 200,000 takeoffs and landings annually. Despite the high numbers, the passenger experience is exclusive and doesn’t skimp on luxury. The two Signature facilities offer plush lounges with gourmet catering, nap rooms, showers and more. The Clay Lacy FBO is also brimming with amenities, and was voted the #22 “Best FBO in the Southwest Region” in the 2016 Pilots’ Choice Awards.

Located three miles from downtown Burbank and 12 miles from downtown LA, Hollywood Burbank Airport is centrally located and a popular choice for residents of nearby Pasadena, Glendale and Hollywood. Since 2003 the airport was known as the Bob Hope Airport, named after the legendary comedian Bob Hope, an aviation lover who kept his plane at the airfield for many years prior to his death. In 2017, the airport was rebranded as Hollywood Burbank Airport, in an effort to attract more customers by promoting its central location. The airport has two private jet terminals with fully-equipped conference rooms, luxurious lounges, showers and refreshments.

Santa Monica Municipal Airport is located in Santa Monica, just a few miles from Malibu, Beverly Hills and downtown Los Angeles. Before it serviced some of the most elite neighborhoods in Los Angeles, the site set the stage for the first flights in Santa Monica. WWI biplanes were taking off and landing on a grass airstrip here as early as 1919. Now, one of the hangars here houses the World Cruiser, the first plane to fly around the world. Charter flights are serviced out of Atlantic Aviation, which is open 24/7 and offers custom catering, baggage services, a conference room and a pilot's lounge.

Los Angeles International Airport (LAX) first opened in 1928 as Mines Field, the city’s first municipal airport. Now, LAX is the fourth busiest passenger airport in the world, seeing over 80 million passengers annually. Luckily for private jet passengers, the airport also offers two incredibly well-equipped private jet terminals that are removed from the hustle and bustle. The airport is popular for travelers flying by private charter to LAX to connect with a long-haul commercial flight. The Aviation facility is equipped with concierges, a public notary, showers and a fully-equipped business center.

Built in 1941, Long Beach Airport is an iconic element of Long Beach heritage. The terminal has been named a Cultural Historic Landmark thanks to its impressive mosaics and distinguishing design. Private jet passengers have a choice between four FBOs: Signature, JFI JetCenter, AirFlite and Pacific Jet Center. Signature and JFI JetCenter are the most luxurious of the set, with comfortable lounges, catering services, showers and activities to keep the kids entertained.

LA/Ontario International Airport is located in San Bernardino, 38 miles from downtown Los Angeles. The airport was built in the 1920s by one of the first flying clubs in southern California, the Friends of Ontario Airport. Since then, the airport has grown to be the third busiest in the LA area. There is generally minimal traffic on the roads to the airport, making it a favorite for residents to the east of LA. Private jets are serviced out of Guardian Jet Center, which is equipped with a conference room, a crew lounge, nap rooms and showers.

Located 35 miles south of LA, John Wayne Airport is the most convenient gateway to the beach towns of Newport and Laguna, as well as Disneyland and Anaheim Angels Stadium. Private jets operate out of Atlantic Aviation Orange County, which has an on-site concierge, valet services and an exercise facility, as well as Signature FBO, which offers multiple conference rooms and a large private lounge.

An A-Z of aviation definitions

Do you know your altimeter from your horizontal stabilizer? Take a look at our glossary of aviation terms, which explains everything from airport procedures and regulations to airplane parts. This A-Z of definitions is useful whether you’re training for an aviation job, work for an airline or are simply a curious passenger.