I was lucky enough to be on board Ed Force One for a leg of Iron Maiden’s Book of Souls World Tour, starting at Download Festival and ending in Oslo Gardermoen.

On Tour with Iron Maiden

I was lucky enough to be on board Ed Force One for a leg of Iron Maiden’s Book of Souls World Tour, starting at Download Festival and ending in Oslo Gardermoen.

A drizzly Sunday morning saw me arriving at East Midlands Airport with some of the Air Charter Service account managers who had been involved in the project. Here we met up with Nicky, another ACS account manager, who has been on board Ed Force One for practically every leg of the tour so far. After picking up our airside passes we made our way out to the aircraft itself, and what a beast it is. A full on jumbo, the yellow airstairs pressed up against its side looked tiny in comparison. Up close, it was just as imposing from afar, the decals stand out starkly against the fuselage and the tail itself is particularly impressive, with Eddie snarling down at you. Once inside, I met with the Loadmaster, Jeremy, who was helping coordinate the move of the excess cargo off the plane, and who has been on touring with Iron Maiden, and others, for the past 20 years. Once we had ferreted out all the excess from the overhead lockers and galleys, we loaded it into transit van we’d bought up with us and checked into our hotel for a brief freshen up. It was at this point that I found out that there was a spare Iron Maiden hospitality pass for Download Festival, and that I would actually be able to go to the festival itself, chill out in the hospitality area and watch Iron Maiden perform. 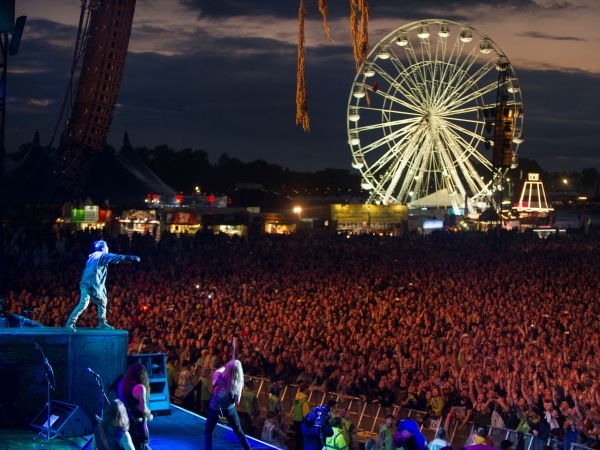 Of course I jumped at the chance, even though, having seen the news before I left, I knew that Download was particularly muddy this year. But even that didn’t quite prepare me for the state of area around the main stages. Within minutes, my trainers were coated in mud and only the fact that they were high tops allowed me to get away with dry feet. For the first hour or so we mingled in the VIP hospitality area, enjoying a few drinks and checking out the Trooper sponsored Augusta MV, used in this year’s Isle of Man TT. We also sampled some of the complimentary catering, offering hot dogs, curry and macaroni cheese all in little takeaway boxes. Soon it was time to wade over to the main stage for the headliners, Iron Maiden, where we joined in singing and dancing, as well as copying the now iconic ‘climb like a monkey’ move during Death or Glory, a song from their latest album, The Book of Souls. After enjoying an aftershow bacon butty and drink, we made our way to the exit, where, after a bit of a walk, we picked up a cab to take us back to the hotel. I for one, showered down my shoes before hitting the hay.

The next day was the day of the flight. From East Midlands Airport to Oslo, this was the second to last leg of the flight, and only a short hop of around an hour and a half. After breakfast, we made our way to the main terminal where we would check-in the guests, and to the area we would also be receiving the VIPs. I then received my boarding card, and set off for flight CC666. Once on board, I found my seat, resplendent with Ed Force One headrest cover, and settled down as the Ed Force One flight attendants bustled around me. Soon, Bruce’s dulcet tones came over the PA, welcoming, informing and cracking the odd joke. We went through the safety demonstration, pushed back and were off. Once in the air the atmosphere felt distinctly un-plane like. Usual etiquette, was thrown asunder and people moved freely throughout the cabin, chatting, laughing and joking. Meals were handed out and drinks orders taken, but ad hoc ordering of tubs of Pringles or a cheeky G&T were the order of the day. After a few chats with those sat around me, including Killer Krew members, it became obvious that these guys are just one big family. Throughout the plane you can spot little photo collages on the walls, with pictures of loved ones back home, or places they’ve visited. In many ways it looks and feels like a standard plane, but these quirky touches, along with the Ed Force One and Iron Maiden decals adorning the walls make it seem more like a flying hotel than simply a plane. 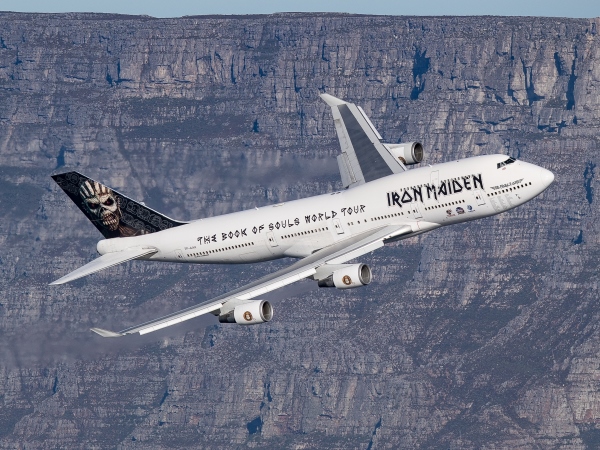