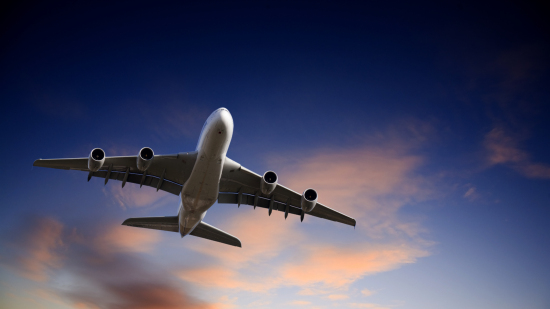 The Airbus A380 as a commercial aircraft

The iconic Airbus A380 is a double-decker airliner capable of carrying up to 800 passengers. Measuring 262 feet from wing-tip to wing-tip, the world’s largest passenger jet is powered by four Rolls Royce engines. The current list price of this colossal aircraft, known as a superjumbo jet, is $432.6 million.

Emirates is the biggest supporter of the Airbus A380, with over 100 in its fleet, showcasing the potential of the commercial A380 with outstanding first class offerings. The Emirates A380 boasts opulent first-class suites, each with three windows, a table and seats that convert into full beds. It also features an upstairs bar and lounge with LED mood lighting, Wi-Fi, entertainment screens and a luxurious shower spa. Business class passengers can enjoy leather seats and personal mini-bars, while the two full-length decks have wide dimensions with a large economy section.

But it’s not just its size and chic interior that make the Airbus A380 special. The aircraft boasts relatively low fuel consumption, as well as reduced carbon dioxide and nitrogen oxide emissions. Thanks to its advanced wind and landing gear design, the A380 is also quieter than most aircraft, allowing it to land at airports with strict noise regulations.

The turbulent history of the Airbus A380

Despite all its merits, the Airbus A380 has proved to be slow-selling as a commercial airliner. With over 500 seats, the plane can be hard to fill which often ends up costing the airline. Smaller, easier-to-fill models like the Boeing Dreamliner or Airbus A350 have now become more attractive options. In 2017, Singapore Airlines announced they weren’t renewing the 10-year lease of their Airbus A380s.

However, at the last minute, Portuguese airline Hi Fly snapped up one of the Singapore Airlines planes, making it the first airline to fly a second-hand A380. The jet has 471 seats spread over three classes with 60 business class seats and 12 first class suites, including a cabin with a full double bed.

In August, Emirates also agreed to buy 36 more Airbus planes, meaning Airbus will continue producing the jets for another decade. This makes Emirates the biggest buyer of the superjumbos, owning half the total stock. Since purchasing their first Airbus A380 a decade ago, Emirates has flown over 80 million passengers in its fleet.

The Airbus A380 as a private jet

Travellers with the budget to spare on an incredibly luxurious private jet have no need to worry about filling their Airbus A380. With many nearing the end of their 10-year commercial leases, resellers are hoping to see many of the planes take on new lives as ultra-luxurious private jets.

At the European Business Aviation Convention and Exhibition (EBACE) in May 2017, resell firm Sparfell & Partners announced it will be refitting and marketing four ex-Singapore Airlines Airbus A380s to private jet customers. The aircraft are currently laid out in a 471-seat configuration.

According to an interview with aviation intelligence company FlightGlobal, Sparfell & Partners plans to convert three of the four aircraft into a VVIP layout with two options: a VVIP conversion on the upper deck with an airline configuration on the lower deck; and a VVIP configuration on both decks. London’s Winch Design has been tasked with transforming the aircraft from commercial airliners into ultra-luxurious private jets.

While the A380 has the potential to take private jet travel to new heights, this fantasy has yet to become a reality. Billionaire Saudi Prince Alwaleed bin Talal-al Saud made headlines in 2007 when he ordered an Airbus A380 as his personal plane. Reports circulated that the prince planned to outfit the plane with 20 staterooms, a marble Turkish hammam, parking space for his Rolls-Royce and electronic prayer mats that automatically turned towards Mecca. However, the deal never went through and the A380 was sold to another buyer.

The Airbus A380 may be the world’s biggest, most expensive jet, but what if you’re looking for something smaller? Here’s a look at midsize and light luxury jets with impressive price tags.

The midsize Embraer Legacy 500 launched in 2008 and costs $20 million. At 68 feet long and 21 feet tall, the jet is the first in its class with a six-foot-high ceiling and flat floor rather than a footwell. The Embraer also has the best cabin pressurization in its class and cutting-edge digital fly-by-wire flight controls. Powered by two Honeywell turbofan engines, the jet has a range of 3,000 nautical miles and is the fastest in its class, capable of flying non-stop between LA and New York with 12 passengers.

Kung Fu movie star Jackie Chan became the first customer in China to buy an Embraer Legacy 500 in 2013. The customized interior of his jet has a light-wood finish, Wi-Fi and an in-flight entertainment system with surround sound. Chan famously owns a small fleet of Embraer planes, including a 650 model with a distinctive red-and-yellow dragon painted on the side. While the star uses his Embraer 650 for international flights, the 500 is perfect to travel on shorter trips in China, with a bathroom and seats that convert into a bed.

Although its price tag pales in comparison to heavy jets, the HondaJet HA-420 is one of the most expensive very light jets on the market, costing $5 million. The jet is the first one produced by Honda Aircraft Company and took 30 years to come to market. With a 39-foot wingspan, the plane can carry up to six passengers and has a range of 1,300 miles. The HondaJet has a bathroom and the cabin features large windows, Wi-Fi and a touchscreen cabin-control system.

What makes the HondaJet HA-420 unique is its distinctive sharp nose, which was apparently inspired by a pair of Salvatore Ferragamo shoes, and its revolutionary engine mounts. Rather than placing the HF120 turbofan engines on the main fuselage, the HondaJet’s engines are mounted above each wing to reduce cabin noise and increase the interior space.

In 2018, Honda brings its newest version of the aircraft, the HondaJet Elite, onto the market. This model has an auxiliary fuel tank and reduced weight, with a 17 percent longer range which means it can fly non-stop from London to European destinations like Barcelona and Reykjavik. The HondaJet Elite is priced at $5.25 million.

Fancy flying in your own private jet, but don’t want the costs or maintenance associated with owning one? Contact us at Air Charter Service to arrange a private jet charter and we’ll help you decide which plane is the right fit for your journey.