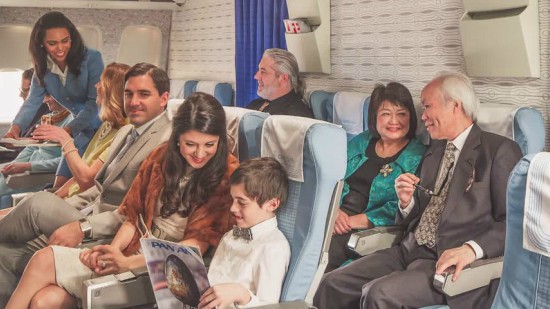 In the 20th Century, commercial airlines represented glamor, luxury and adventure. But with the growth of air travel – and the budget airline – is private jet charter taking their place in the market?

The rise of private jet charter

In the 20th Century, commercial airlines represented glamor, luxury and adventure. But with the growth of air travel – and the budget airline – is private jet charter taking their place in the market?

Flying in the Golden Era

Mid-20th-century planes were more spacious than their modern-day counterparts; in fact, business class flights today offer around the same amount of legroom as economy seating did back in the 1960s. They also offered more opportunity for sleep and relaxation – some planes, like the Boeing Stratocruiser (advertised by Boeing as “just like the flying carpet!”), featured well-padded full-reclining seats which flight attendants made up with sheets and blankets, while others, like the Imperial Airways Flying Boat, had curtained sleeping areas with bunk beds. With a lounge, restaurant or bar on board most planes, pins and needles were easier to stave off, as passengers could stroll between areas. Aircraft were also brighter, with large windows allowing light to flood the cabin.

Many mid-20th-century airlines aimed to make flying a luxurious experience with impeccable customer service. Pan Am’s 707 Clippers, for example, offered restaurant-quality meals with meat carved in the aisle by onboard chefs, and every table was adorned with a vase of fresh flowers.

Between 1970 and 1974, some American Airlines jets even boasted music lounges, complete with a real piano, at the rear of the aircraft. Complimentary in-flight drinks were standard, and many planes had a walk-up wet bar, while the Continental Airlines DC-10 even boasted its own onboard pub with fully-stocked bar, round tables, stools and bar games.

How do modern airlines measure up?

According to Professor Ruchi Goyal of the University of Delhi, civil aviation was heavily affected by the global financial crisis, with this impact peaking in 2008-9. Travelers were less likely to fly, vacationing less or choosing cheaper alternatives. Premium travel fell by 25%, showing a drop in the market for luxury travel and the priority travelers placed on service and comfort. The tumble in market demand was worsened for airlines by increased fuel and operating costs, which reduced profitability and growth.

The impact of this can still be felt today. To reduce costs and protect profit margins, many airlines overbook flights and enforce automatic ticket cancellations, leading to a number of high-profile incidents. In April 2017, for instance, a United Airlines passenger was violently ejected from a flight, leading to accusations that he was targeted due to his ethnicity, while in May 2017, a family was ejected from their Delta flight from Maui to Los Angeles. In addition to these instances of compromised customer service, commercial airline flights are vulnerable to delay or cancellation, while increased security procedures following the 9/11 terror attacks have led to longer wait times. Meanwhile, the rise of the no-frills airline has depressed the profit margins of luxury options that traditionally offered high levels of comfort and customer service.

The rise of private jet charter

The disadvantages of modern commercial air travel – long wait times, lower levels of service, less space, overbooking and forced cancellation of tickets – are largely absent with private jet charters. Flying out of smaller airports, passengers benefit from fast checks, low congestion and shorter wait-times on the tarmac. Because smaller jets fly higher, flight times are shorter and adverse conditions reduced because aircraft often fly above the weather. And for those seeking personalised customer service, privacy and space, nothing can beat a private jet, with many harking back to the heyday of air travel with luxurious extras such as bedrooms, lounge areas and luxury dining.

Given this renaissance of the Golden Era of aviation through the rise of private jet charters, it’s unsurprising that the market for private jets and private jet charters has grown rapidly in the past few years. In 2013, the global market in business jets was worth $20.9 billion, and it’s projected to reach $33.8 billion by December 2020. Tremendous growth is also expected in Asia, with forecasts suggesting that in the next decade the business aviation industry in India will treble, making it the world’s third-largest aviation market by 2020. According to New Flight Charter, journeys are also longer, clients choose larger aircraft and budgets are larger, rising from $15,000 to $17,000 per chartered flight. Prices are also increasingly competitive; for instance, with Air Charter Service you could fly from Nice to London on a private jet charter for as little as £3,500.

While quality and service on commercial airlines has decreased since the mid 20th century, a new Golden Era in aviation is arguably beginning; one dominated by private jet charter. When traveling in a private aircraft service levels are high, comfort and luxury come as standard, and travel times are minimal. Private jet charter has never been more affordable or desirable.

If you would like to enjoy a more glamorous kind of travel, charter a private jet with ACS.