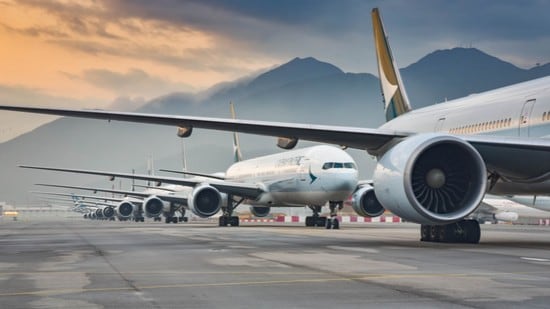 As air passenger traffic comes to a halt, airlines are looking at other ways to create revenue. The COVID-19 pandemic requires urgent air freight. Airlines are now transforming their passenger aircraft into cargo carriers to help with the air cargo demand.

The COVID-19 pandemic has resulted in air passenger traffic shutting down. This unfortunate fate has meant that cargo capacity has taken a hit as air cargo is carried in the bellies of passenger planes. Some airliners are taking this opportunity to repurpose their passenger fleet to carry cargo and stay afloat in these turbulent times.

Due to the harsh effects of the COVID-19 pandemic, the passenger aviation industry is at a standstill. Airlines had to ground their fleet due to worldwide travel restrictions and countries closing their borders. These travel restrictions negatively impact the air cargo industry as more than 50% of air cargo is carried in the bellies of passenger airplanes. Currently, there is an extraordinary demand to transport medical supplies and personal protective equipment. The global shortage of air cargo space means that charter and air freight rates have spiked.

Since early March 2020, air freight rates from China to the U.S. have quadrupled and have skyrocketed from Asia to Europe. All of a sudden, air freight demand substantially outstrips supply. The urgent demand for medical equipment as well as other essential healthcare goods, to help fight COVID-19, has caused a steep rise in the cost of air cargo charters. You can expect to pay anywhere between $800,000 and $1.5 million, which will depend on the route. This situation has led airlines to get creative with their grounded passenger aircraft. It has forced them to rethink how to stay afloat in these unprecedented times.

How airlines are adapting to the air freight cargo demands

With no passengers rushing to airports and catching flights, airlines are now looking to fill their aircraft with cargo in hopes of generating necessary revenue. Airlines are flying some of their parked wide-body aircraft as cargo-only flights. This is a welcoming act for shippers, forwarders, and government agencies, who are in need of air freight capacity. Both Airbus and Boeing wide-body aircraft can carry a substantial amount of cargo – approximately 30 tonnes. However, the air freight demand will require these aircraft to carry the maximum cargo, which is 60 tonnes for the Boeing.

As with current events in every industry, there is no template for temporarily turning passenger aircraft into a freighter. Usually, the manufacturer and certifying authority will approve changes to aircraft. However, this process can take months to complete as it requires a thorough, multi-party oversight to test and complete. One thing air freight transportation does not have is time, the urgency of the COVID-19 crisis has meant that Boeing has cleared local authorities to make a final decision. Boeing has stated that it had No Technical Objection (NTO) to operate the airplane without passenger seats. “This No Technical Objection does not represent or imply formal Boeing approval or certification. The [airline] operator retains the final responsibility,” it told airlines in March.

Major airlines who have launched their cargo-only flights include:

The U.S. has various freight operators with large cargo planes, including Atlas Air, FedEx, Kalitta, and UPS. Currently, they are not as dependent on passenger airlines as Canada may be on Air Canada. American Airlines, Delta Air Lines, and United Airlines are operating cargo-only flights on their passenger aircraft but none of these airlines have begun removing seats.

Only using the below-deck cargo compartments, Air New Zealand has been running cargo-only flights between Auckland and Shanghai. General cargo such as seafood and produce that forms a huge part of New Zealand’s economy is carried out of Auckland. Essential medical equipment is transported from Shanghai to Auckland.

Cathay Pacific is supplementing its high-demand freighters with passenger aircraft for cargo-only flights. The airline is evaluating the removal of seats in order to carry more cargo.

China Eastern has already removed seats from an A330 passenger aircraft.

In March, American Airlines announced its first cargo-only flight set to depart from Dallas Fort Worth International Airport (DFW) and land at Frankfurt Airport (FRA). It was the first scheduled cargo-only flight, since 1984 when the airline retired the last of its Boeing 747 freighters.

Air New Zealand is currently evaluating removing seats on a 777-200ER. Air Canada is converting the 777-300ER. Both airlines do not have freighter aircraft and are turning to passenger aircraft for supplementary cargo lift. Since March 22nd, Air Canada has operated 40 cargo-only flights. The airline plans to operate up to 20 cargo-only flights per week using the newly converted Boeing 777 passenger planes.

Cathay Pacific is also looking to remove seats from its Boeing 777 passenger fleet.

Air Charter Service offers world-renowned private jet charters and cargo charters. ACS is up-to-date with the latest COVID-19 U.S. travel restrictions. Our global offices have been sourcing capacity and can advise that there are solutions available. Contact us for more information or to arrange your shipping and logistic requirements.