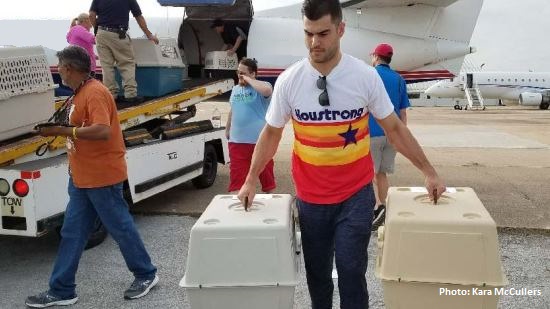 Following the aftermath of Hurricane Harvey last year, severe damage to many animal rescue centres in Texas meant that hundreds of unfortunate pets had to be flown to new homes. One such charter transporting the cats and dogs was helped by superstar pitcher and recent World Series winner, Lance McCullers Jr. of the Houston Astros.

Richard Thompson, President of Air Charter Service Americas, commented on the flight: “Over the months following last year’s hurricanes we were involved in several rehoming flights for pets displaced by Harvey, Irma and Maria, flying them to new homes in Nevada, Oregon and California. With this one, however, the charity that had arranged the charter flight had some extra help in the form of Lance.

“He is a very active ambassador for animal welfare, going so far as to set up the Lance McCullers Jr. Foundation last year. Fresh from winning the World Series, he was more than happy to come along to William P. Hobby Airport to help load the pets onto the Metroliner aircraft. From there, they flew to their new abodes in Los Angeles.”

Thompson concluded: “We’re pleased to report that all 240 animals have settled in well to their new surroundings.”