Air Charter Service has once again been voted 'Charter Broker of the Year'https://aircharterservice-globalcontent-live.cphostaccess.com/images/usa/news/943906_pa_award_2017_tcm61-43700.jpg 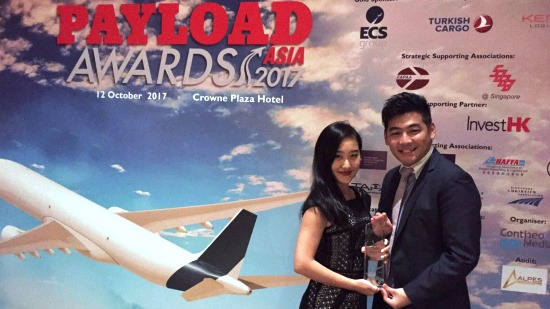 Air Charter Service has once again been voted ‘Charter Broker of the Year’, for the fifth year in a row, at the Payload Asia Awards gala night held at the Crowne Plaza Changi Airport in Singapore, on October 12th.

Stephen Fernandez, Regional Director for ACS APAC, commented: “We’re over the moon to win this accolade again, following the past four years’ wins. It is a testament to our teams’ hard work that our customers hold us in such high regard – we’d like to profusely thank everyone that voted for us. We believe that the awards that are voted for by the industry are the only ones that really count.”

Soomin Jung, from ACS Hong Kong, collected the trophy at the event and is pictured alongside colleague Kohei Cheng.

This is the third major industry-voted trophy that the company has won this year, following our fifth Air Cargo Week award, along with the corresponding STAT Trade Times award. As well as, of course, Chris Leach’s ‘Lifetime Achievement’ award.