Leading aircraft specialist, Air Charter Service, arranged a VIP-configured, fully customised ‘Club Jet’ to take some of the world’s biggest DJs to host a party in the skies, before kicking off a huge clubbing weekend in Germany.https://aircharterservice-globalcontent-live.cphostaccess.com/images/usa/news/873841_alle_farben_dj_tcm61-51273.jpg 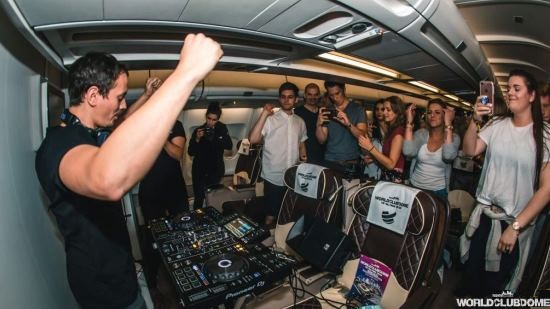 Leading aircraft specialist, Air Charter Service, arranged a VIP-configured, fully customised ‘Club Jet’ to take some of the world’s biggest DJs to host a party in the skies, before kicking off a huge clubbing weekend in Germany.

BigCityBeats’ ‘World Club Dome’ is a highlight of the clubbing calendar, and described as “one of Europe's biggest EDM and dance festivals”. It consists of a whole weekend of DJs playing to more than 120,000 clubbers over 20 different dancefloors in Frankfurt. The party doesn’t start at the club in Frankfurt though – around 100 lucky guests begin the experience at more than 30 thousand feet on an Airbus A340 between London and Germany, directly before the main event takes place. The aircraft is configured in such a way that there is enough room for the decks, the sound system and for people to get up and dance.

Caroline Werf, Managing Director of ACS Germany, explains: “We were excited to be tasked with arranging this special charter again and, as in previous years, some of the biggest DJs on the bill kicked off the weekend for the passengers. Curbi and Alle Farben both performed DJ sets on the aircraft as it flew from London to Munich and then on to Frankfurt.”

ACS has arranged the trip for the previous two years – on a Boeing B747 in 2016 and then on the more exclusive A340 last year. Werf continues: “This year BigCityBeats wanted to recreate the VIP feel again and held it on the same Airbus as in 2017.

“After touching down, the party continued at the Commerzbank Arena near the centre of Frankfurt. As well as all the dance floors, there was also a pool area to cool off in, a camping area and a helipad.”

We are a global company with 22 worldwide offices, spanning all six major continents and we offer private jet, commercial airliner and cargo aircraft charters, as well as onboard courier solutions. We arrange almost 15,000 contracts annually with revenue of close to 700 million dollars. We were formed in 1990 by Chairman Chris Leach and CEO Justin Bowman in a basement, and we now employ more than 400 staff worldwide.