In 1994, ACS embarked a humanitarian flight to bring aid to Rwandans following the shocking genocide.https://aircharterservice-globalcontent-live.cphostaccess.com/images/usa/news/386984_rwanda201994_tcm61-38241.jpg 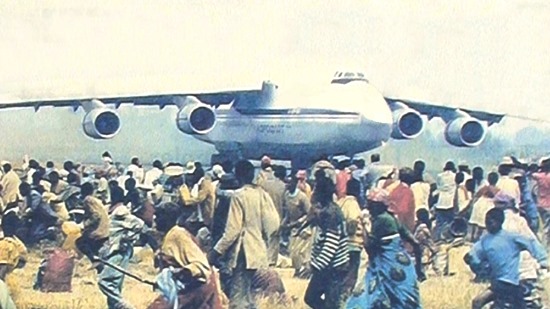 Following the shocking genocide in Rwanda in 1994, in which more than 800,000 people were killed, an estimated 2 million more fled to bordering Uganda and the Democratic Republic of Congo. The refugees had no shelter, food or water, and so a massive humanitarian effort got underway. One of the first relief flights in was ACS’s Antonov 124 charter flight, which landed in Goma on Tuesday 19th July 1994, and the next day it was front page news – one national newspaper led with the story…

Rwanda gets help from the heavens

Airlift to save a nation

“Their cries have been heard at last.

A giant aircraft yesterday brought hope as well as relief aid to Rwandan s who have fled their murderous war.

Most have no food, no shelter, no water and – unless there is urgent help – no hope of survival.

This aid flight was the beginning of a massive international relief operation to help an exodus described as reaching “frightening biblical proportions”.*

Justin Bowman, who was on board the aircraft recalls: “At the time the shock of seeing so many people living and sleeping alongside the runway as we landed the giant aircraft into Goma was almost palpable. A town that was built to accommodate 120,000 suddenly had 1.2 million people inhabiting it, fearing for their safety, which hugely complicated the airlift operation we were putting together to help save lives.

“This flight was the first of nearly one hundred AN-124 charters that we arranged into Goma and Kigali for a whole multitude of international relief agencies over the following two months. We were running an ‘air bridge’ of humanitarian aid from both Libreville in Gabon, and Nairobi, Kenya, directly into where it was most needed. I am proud that we were able to use our skillset to save lives and really make a difference.”