The AN-124 is one of the largest aircraft in the world, specifically designed for carrying heavy or bulky loads. Equipped with a high volume of cargo capacity, drive-on loading ramps and a variety of built-in freight handling equipment, this could be the answer to your cargo charter needs.

The Antonov AN-124 is one of the world’s largest civil cargo aircraft. To allow the AN-124 to carry super-heavy and oversized cargo weighing up to 150,000 kg (depending on the model) across the greatest range, the aircraft has been specifically designed to optimise its attributes.

Even its multi-leg landing gear is specially built for handling extremely heavy loads. Complete with 24 wheels, the landing gear is self-orienting and incorporates a ‘kneeling’ mechanism which allows the fuselage ground clearance and angle to be adjusted to assist the loading and unloading of self-propelled equipment.

The AN-124 has a double-deck layout with the cockpit, the relief crew compartment and the 88-seater passenger cabin on the upper deck and the cargo hold below. The flight deck seats six crew, the pilot and co-pilot, two flight engineers, the navigator and communications officer.

To facilitate cargo loading and unloading, the AN-124 has two giant hatches. The complete fuselage nose can be elevated to open the front cargo hatch and there is a further cargo hatch in the rear of the fuselage, both equipped with extending loading ramps.

For loading of non-standard cargo, the hold is equipped with two electric winches of 3 tonnes traction each and 4 electric hoists with a common carrying capacity up to 30 tonnes. The AN-124 can be loaded and unloaded without the help of ground facilities and to help speed up operations, the onboard system of cargo handling equipment consists of two travelling cranes, two winches, rolling floors and tiedown equipment.

Design work started on the AN-124 in 1971 and construction of facilities to build the aircraft began in 1973. Manufacturing on the first airframe began in 1979 and was carried out in parallel by two plants: the Russian company Aviastar-SP (ex. Ulyanovsk Aviation Industrial Complex) and by the Kyiv Aviation Plant AVIANT, in Ukraine. This engaged over 100 factories to produce systems and parts. The first AN-124 flight took place in December 1982 and the AN-124 was introduced at the 1985 Paris Air Show.

Engine improvements to meet Chapter 4 noise regulations, structural improvements to increase service life, and avionics and systems changes for four-person operations down from six or seven took place in the early 2000s. In May of 2008, the AN-124-100-150 was announced, a reinforced version of the 120,000 kg payload AN-124-100 capable of accepting up to 150,000 kg of payload.

Antonov can trace its lineage back to 1946 when Oleg Antonov set up the Oleg Konstantinovich Antonov Design Bureau No.153 (OKB-153) in the city of Novosibirsk. Five years later, OKB-153 moved from Novosibirsk to Kiev, where the highly-respected AN-12 turboprop military transport aircraft was born in 1957 and later won the USSR’s Lenin Award.

In 1959, OKB-153 began building a flight testing and improvement facility in Gostomel, a suburb of Kiev, This facility eventually became referred to as ‘Antonov Airport’. In 1960, OKB-153 began to develop the world’s first wide-body aircraft, the AN-22 Antei, which was introduced at the Paris Air Show in 1965.

In 1971, OKB-153 began development of what would become the world’s largest aircraft ever mass-produced, the AN-124. Prototypes were constructed in Kiev, Tashkent and Ulyanovsk and eleven years later, on the 26th of December 1982, the AN-124 took to the air on its maiden flight.

Following the death of Oleg Antonov in 1984, Piotr Vasilyevich Balabuev was appointed General Designer. It took him and his team just four years to design an aircraft capable of carrying the Soviet Buran spacecraft, the AN-225 Mriya (Dream). Still the only one of its type in the world and the heaviest aircraft built to date, it made its maiden flight on the 21st of December 1988. It then made a series of flights carrying the Buran and made its international debut at the Paris Air Show in June 1989.

Antonov Design Bureau remained a state-owned company after Ukraine achieved its independence in 1991. Now known as Antonov State Enterprise, the company has its headquarters and main industrial facility in Kiev. On the 12th of May 2015, it was transferred from the Ministry of Economic Development and Trade to the Ukroboronprom (Ukrainian Defense Industry). A year later, Ukroboronprom announced the creation of the Ukrainian Aircraft Corporation within its structure, to combine all aircraft manufacturing enterprises in Ukraine.

Charter rates for the Antonov AN-124 can vary greatly depending on the length of the journey you have planned, as well as the airports you decide to fly in and out of.

If you feel the Antonov AN-124 is the solution to your cargo charter needs, then contact us and we can get the process started for you. 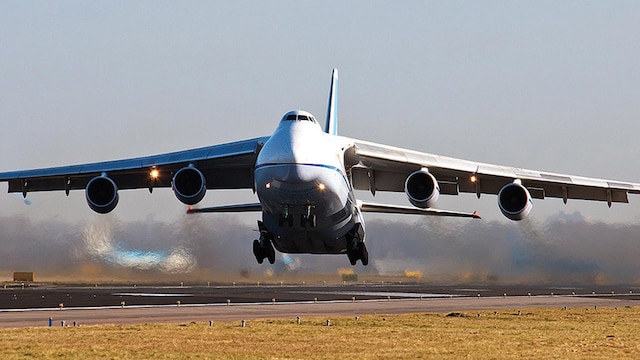 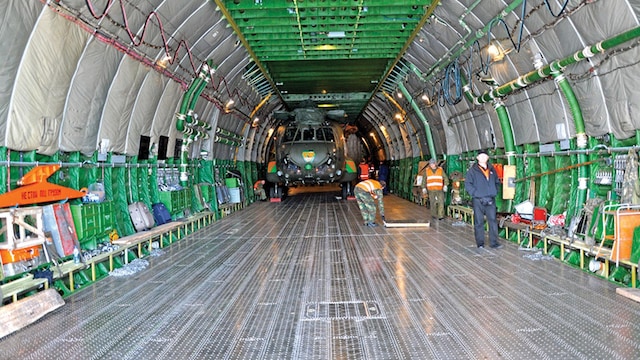 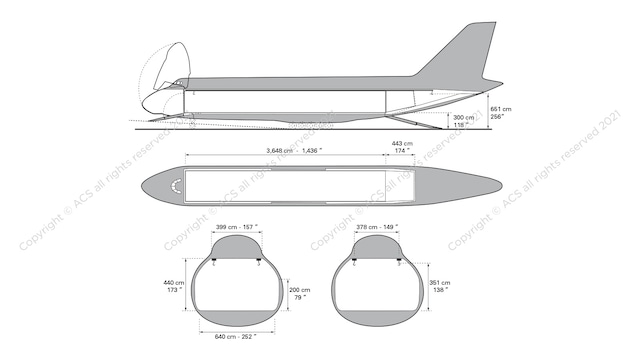