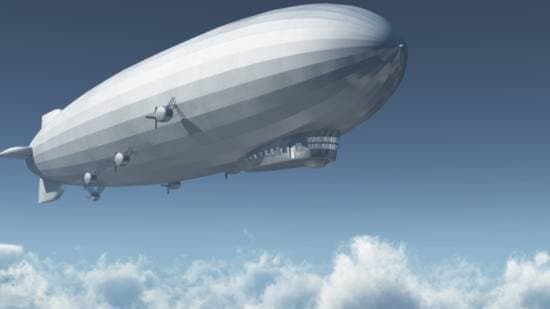 Airships have fired the imagination of flight enthusiasts for centuries, but did you know they’re still in use today? You may not be able to book a charter flight on board an airship just yet, but join us as we find out more about the future of these exciting aircraft.

The History of Airships and Airship Travel in Commercial Aviation

Airships were thought to be the future of commercial aviation until the Hindenburg disaster. But could they be making a comeback? We take a look at the history of airships, from passenger flights to military and advertising blimps, and glimpse at a future that could include private charter flights aboard them some day.

What is an airship?

Also known as a “dirigible balloon” or “blimp”, the classic airship is a large gas balloon that rises into the air and can be steered using engine-driven propellers. Similar to hot-air balloons, they’re powered by gases like hydrogen and helium which are lighter than air. Airships come in three broad types: rigid and semi-rigid designs use metal frames to keep the balloon’s shape, while non-rigid balloons are inflated by gas alone. Airships have most commonly been used throughout history as:

Advertising blimps – Commercial blimps have been used for advertising since 1925. Since they can hover over one space and be seen from afar, they’re particularly effective for advertising at outdoor events, and retain their “wow” factor to this day.

The early history of airships

The airship’s story starts in France, following the invention of the hot-air balloon in 1783. Inspired by the creation, engineer Jean Baptiste Meusnier designed an elaborate dirigible with a 276ft-long elliptical balloon powered by three propellers, featuring a boat-like basket attached to the balloon by ropes.

His design was never built, but shortly after in 1785, French inventor Jean-Pierre Blanchard and American Dr John Jeffries crossed the English Channel in a hydrogen balloon. During the two-and-a-half-hour flight, the pair had trouble steering the balloon, which was also overloaded, and dipped dangerously close to the water. To lighten the load, Blanchard and Jeffries threw out their cargo and even stripped off their clothes.

In the following years, airship design developments came thick and fast. In 1852, French engineer Henri Giffard flew the first steam-powered hydrogen-balloon airship with steering. However, a key turning point came with the creation of the Zeppelin airship in 1895, which was patented by Count Ferdinand von Zeppelin and built by aviation pioneer David Schwarz.

The rise of Zeppelin and Goodyear airships

The Zeppelin was a rigid airship, featuring a long, thin, tough-skinned balloon filled with hydrogen gas. Small crew and passenger compartments were suspended beneath it, and there were two 15-horsepower engines, which allowed the airship to fly at 25 miles per hour. Zeppelins were mainly used for scenic passenger flights, but 20 were built to bomb Britain during the First World War, and were successful owing to their speed and ability to carry heavy loads.

Over in the US, 1925 saw the first flight of the Goodyear Pilgrim, a 110ft-long, 45ft-high helium airship. The Pilgrim was powered by an 80-horsepower engine and was the smallest airship in the world, capable of carrying two passengers as well as the pilot and mechanic. The Goodyear was popular with luxury pleasure cruise passengers but later used by the US Navy and Army for surveillance. Today, many people know Goodyear airships as advertising blimps.

Airship travel took a dramatic turn in May 1937, when the world’s largest passenger Zeppelin, LZ 129 Hindenburg, exploded while landing in New Jersey, killing 13 passengers, 22 crew members and one person on the ground. The devastating crash was caught on camera by television crews and, along with a string of other airship fires, the Hindenburg disaster was largely responsible for ending private flights on passenger airships.

Just a year before the crash, the Hindenburg had successfully flown across the North Atlantic, becoming an icon for airship travel. The vessel was known for its luxurious interior, similar to five-star cruise ships and the opulence of today’s private jet charters. The Hindenburg had 34 double-berth cabins capable of accommodating 72 passengers, as well as lavish dining rooms and lounges. There was also a writing room, bar, promenades for spectacular aerial views and, unbelievably, a smoking room.

In the wake of the Hindenburg crash, airships were mainly used by the military for surveillance purposes and to carry cargo to remote areas. In 1984, for example, the US Navy funded a project to develop airships with turboprop engines for coast-guard missions. This was later discontinued owing to budget cuts. Elsewhere, though, Westinghouse and Airship Industries continued their work on airship designs – and developed the Sentinel 1000, which had its maiden flight in 1991.

Where are we now? What’s the current state of the industry? Are airships making a comeback? Here are some of the ways airships are currently being used or may be used in future:

Carve out your own luxury on a private plane

As commercial aviation evolves, it seems the story of the airship is set to continue, and who knows when this aircraft may become an alternative to chartering a plane. In the meantime, for some exclusive air travel of your own, check out Air Charter Service (ACS): we can provide you with a private jet quote in no time at all. If you’d prefer to speak to one of our local travel and concierge experts, contact us to hear how we can turn your next trip into an luxuriously comfortable and ultimately convenient travel experience that meets all your plane rental requirements.

The fastest private jets in the world

The aviation industry is on the brink of exciting new developments that will see commercial flights and private jet charter going farther and faster than ever before. So fasten your seatbelt for a look at the top 10 fastest private jets taking air passengers where they need to go in a hurry.