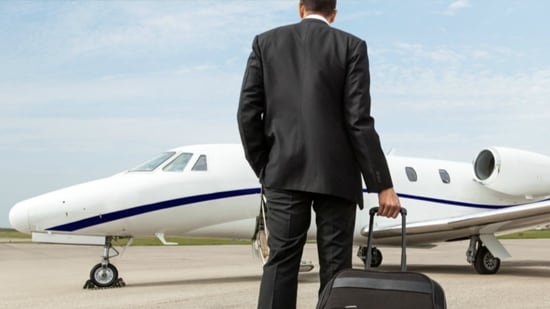 There are lots of different types of private jet and some are more affordable than you might think. There are many super-expensive models out there, but the ones on this list can be purchased for a fraction of the price. Read more about the top five lowest-cost options available today.

Whether you’re shopping – or window shopping – for a very light, light, mid-size, super-mid-size or heavy jet, the most affordable aircraft can be a fraction of the price of the most expensive models on the market.

To keep things simple, we’ve listed the cheapest private jet in each category, so that you can get a better idea of the purchasing price range for all of the different options. Note that these prices will also vary depending on whether you are buying new or second-hand.

If you’re more interested in private jet charter rates, this list will also give you a solid idea of the different kinds of options available when making a booking for a private jet rental or group charter.

5 of the most affordable private jet models today

The cheapest private jet on the market is the small but mighty Cirrus Vision Jet at $2 million. The Vision Jet is the world’s first single-engine private jet, and is powered by a Williams International FJ33-5A turbofan engine, which produces 1,800lbs of thrust. The aircraft took 10 years to design and build, and features a unique V-tail instead of a traditional rudder. It can cruise at 345mph at a maximum altitude of 28,000ft, with a range of 1,150 miles. Although the plane is designed to be flown by the owner, a pilot can be hired instead for greater convenience.

Passengers can enjoy a spacious cabin at 4ft tall and 5ft wide, with large windows and seating for up to five adults and two children. Luxurious amenities include an in-flight entertainment system, mood lighting and USB charging points. There’s a panoramic windshield in the cockpit, as well as a cutting-edge Garmin Perspective Touch avionics suite and sidestick technology. The Cirrus Vision Jet even boasts a flight envelope and parachute system for emergencies, which will put any passengers at ease when traveling on this aircraft as a private plane rental.

This model is a popular alternative to airlines due to its comparatively low direct operating costs, which have been estimated at under $1,000 per hour. Other positive attributes include the fact that it is easy to use and versatile. Its size also means it is easy to keep it safely parked in a hanger when not in use, as you would with any other very light aircraft.

If the Vision Jet sounds a little tight, you can buy a brand new Cessna Citation CJ3+ for $8.3 million. Launched in 2014, it’s a new and improved version of the CJ3 – named ‘best of the best’ in the light jet category by Robb Report in 2011– with a more comfortable cabin and an upgraded Garmin 3000 avionics system. The aircraft is certified for single-pilot operation and has an impressive wingspan of over 54ft, which is designed for extra lift and less drag.

The cabin can accommodate up to nine passengers and is 4ft 10in wide, 4ft 10 tall and 15ft 8in long. It comes in a choice of six design themes, and features 14 large windows, swing-out seats, LED lighting, Wi-Fi and a standard lavatory. Also, the jet has a maximum range of 2,040 nautical miles, a luggage capacity of 1,000lbs and is cheaper to run than its closest competitors such as the Embraer Phenom 300.

The world’s bestselling business jet can be yours for $13 million. Launched in 1998, the Cessna Citation XLS+ is a very versatile aircraft, delivering high performance on short- and long-haul flights. It has a maximum cruise speed of 507mph and a transcontinental long range of 2,100 nautical miles. The jet can also take off from shorter runways and has a state-of-the-art Rockwell Collins Pro Line 21 avionics system.

The cabin comes in six color schemes and is the largest in its class at 5ft 6in wide, 5ft 8in tall and 18ft 6in long. Passengers can relax with fully reclining leather seats, foldaway tables, an entertainment system and Wi-Fi. You can even configure the cabin to include a side-facing couch. There’s seating for up to nine passengers and a galley for food preparation, as well as space for more than 800lbs of baggage.

Cessna does it again. Its powerful Cessna Citation Sovereign+ is the most affordable super-mid-size jet available today at $18 million. With a maximum range of 3,200 nautical miles, passengers can fly from Bangkok to Dubai nonstop. The Sovereign+ is known for its excellent runway performance, with the shortest take-off among private jets in its class. This means it can fly from a small airport. Also, the aircraft has powerful Pratt & Whitney PW306D turbofan engines and a 22.05-meter wingspan with range-enhancing winglets.

The cabin is 5ft 6in wide, 5ft 8in tall and 25ft 3in long. It can accommodate 12 passengers in complete luxury, with various configurations including an optional couch. There are new recessed armrests for extra aisle space and a Clairity Cabin Technology System for in-flight internet. Even more remarkable is the best-in-class external baggage compartment, which can carry up to 1,435lbs of luggage.

While the cost of large jets almost always elicits sticker shock, the cheapest private jet in this category may surprise you. The luxurious Embraer Legacy 650E comes in at $25.9 million, a relative bargain when compared to the similarly sized, $61.5 million Gulfstream G550. The ‘E’ here stands for ‘Evolution’, and the model certainly offers that, with two Rolls-Royce AE 3007A2 engines and Honeywell Primus Elite Avionics. As an aviation industry first, the plane also comes with a 10-year or 10,000-hour warranty.

The Embraer 650E has seating for 12-13 passengers in three separate cabin zones, allowing some to work while others sleep comfortably in leather seats. There’s broadband, Apple TV and a worldwide phone service, as well as multiple configurations which can include a conference table for business meetings for those traveling for work. The 3,900-nautical-mile range allows for longer flight hours, so passengers can fly nonstop from New York to Munich, for example.

Best of the rest

We’ve covered five of the most popular low-cost jet options, but there are many more options available. Still interested in looking for more low-cost private jet options? Here are some other models that you can consider, which have also made a name for themselves in the international aviation industry:

This very light jet was first designed to seat four to six people, but in 2018, after much test flying, the decision was made to stretch the original 714 design – by 31in – so that the aircraft could accommodate six people with luggage (and consequently it is now known as the 716X).

This model is being positioned as a competitor of the Cirrus Vision Jet, since it will be the second single-engined private jet on the market. The Redmond, Oregon-headquartered Stratos estimates that this aircraft will have a 1,500-nautical-mile range.

Other notable features include a Pratt & Whitney Canada JT15D-5 engine, as well as Garmin G3000 or G5000 avionics. The 716X took its first flight in July 2020, in Oregon, climbing to 13,500ft, and further flight test programs are set to continue. This plane is likely to cost around $2.5 million.

This light jet is worth $9-10 million as compared to the similarly sized $8.3 million Cessna Citation CJ3+. The Phenom 300 has a range of up to 2,200 nautical miles and can accommodate up to 10 passengers.

This model builds on the success of the Phenom 300, which was launched in 2010, and is credited with being the most delivered private plane in the world since 2013. According to Business Insider, more than 400 of these planes have been delivered to over 40 countries.

The updated Phenom 300E version was unveiled in 2017, with the ‘E’ here standing for ‘enhanced’. Features include Pratt & Whitney PW535E1 engines, as well as more leg and head space, thanks to the aircraft’s Oval Lite® cross-section cabin design.

This midsize private jet costs $13 million brand new – the same as the Cessna Citation XLS+ – with a lower price tag for second-hand versions. The Bombardier Learjet 45XR has a range of around 2,000 nautical miles and can seat eight passengers.

This model is an update of the Model 45, and was released in 2004. Upgrades include faster cruise speeds, higher take-off weights and faster-to-climb rates than its predecessor. This is in large part due to engine upgrades, from the original 45’s Honeywell TFE731-20 engines to the current TFE731-20BR configuration.

No matter how affordable these planes may sound, bear in mind that prices don’t include additional private jet charter costs that affect owners, such as inspections, insurance, hangar space, pilot expenses and interior customizations. You should also take into consideration fuel costs, which vary depending on flight time and aircraft type.

Consider a private plane charter instead

If this isn’t the kind of investment you can afford to make yet, you can avoid most of these costs by opting for a private jet charter or private jet lease instead. Contact us for more information about private plane costs and to get a personalized quote for the aircraft of your choice.

If you’re looking for ad hoc flights, we also offer empty-leg flights at significant savings compared to regular charters; this happens when a plane is flying back to base empty following a one-way booking. Keep an eye out for deals on our regularly updated empty leg flights page for details.

The cost of flight on a private jet in the USA

Comparative analysis of top U.S. aviation courses, with extensive information about universities and their aviation degrees

In this report, we take a detailed look at the some of the top universities in the U.S. offering aviation and aeronautics courses, including a comparison of the cost, courses offered, course content and duration of study for each.